It’s been three weeks since I updated my blog. It’s not something I feel like doing.

After 17,500 kms of riding, overcoming all sorts of problems and hurdles, I’d hit one that I just couldn’t overcome.

My plan had been that I would go back to the court case try and come to a reduced negotiated amount for the compensation, pay that, get a slap across the left wrist, get the bike back, send it and myself home. I would then fix the bike in Brisbane, ship it to Europe in time for spring and spend the spring, summer and autumn touring Europe. That plan was a pure fantasy.                    From the 18th to 24th January I spent many a happy hour with Matt and Christa. I went out and had a bit of therapy on my sore body, which I think helped. Had discussions with the Embassy and the tour guide as well as others that friends had rallied to ease my journey through the mess that is the Myanmar Judicial System.

It wasn’t until Friday the 24th that the tour guide informed me that the court case was due to be heard on  Monday 27th and that he would pick me up on Sunday morning at 8.00am to make the 450 km drive back to Mandalay. We would then be able to get back to the Immigration office in Shwetaling where the case would be heard. When my friends heard of this and after discussion with some of her contacts, in their words “alarm bells started going off”.  So by Saturday afternoon she had arranged a meeting with a lawyer and an interpreter to check out my options.

I had been told that I was to face charges under clause 336 and 338 of the penal code. Despite google searches I had never found a complete English version on the clauses. I didn’t even know if I had been charged under these clauses as i had never been before a judge or into a court. I was told by the tour guide, one week after the supposed event, that 2 guys had paid $3000.00 in bail. To this I had never seen any documentation. So I was always a bit suspicious of whether this had ever been paid or just another way of extorting money. So when we went to the lawyer I finally got to see the clauses printed in English. 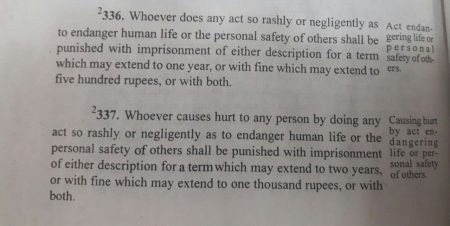 Now I didn’t think I had done anything rashly or negligently, but that didn’t matter I was a foreigner. I had to be in the wrong. The rider of the other bike who had broken all the traffic rules, wasn’t charged at all with anything. The bit that caught my eye was the 5 year jail sentence. The lawyers answer to all this was that we should immediately lodge a counter charge against the other party. This would have sounded OK except when questioned about for how long this court case could drag on. His reply was very vague, but at least a couple of months but more like 6. And even then there were no guarantees of avoiding a jail sentence.

This court case would be held in the police district where the accident happened. The police came from that district, as would the judge, as did the other parties and all their relatives. Sounded to us like it would be a bit of a worry.  The Myanmar justice system sort of works as a pay as you go process. Every official who have had to interact with will want some of the payout figure, which by this time had reached $8000.00. It kept on going up with every official who decided they should have something to do with this accident. There were lots of them, not to mention all the relatives who what probably put their hands out also.

My beautiful bike meant heaps to me. I spent a lot of time and money preparing for the trip and maintaining it on the road. It was just a beautiful bike to ride. I loved my bike. So I really didn’t want to leave Myanmar without it. Despite all of that I really had to take the emotion out of my decision. It came done to minimising the financial loss. I had probably spent 15 grand buying and equipping the bike. At this stage I had put another 17,500kms on the clock, Plus it had now had two rather heavy accidents. Just a rough estimate of the parts to fix it was around $3500.00 without freight and rebuilding it all. I tried to get a shipping quote for the bike back to Oz, but it seemed to be something no one wanted to commit on. It would have been at least $2000.00. Against all this was that I could get out of the country and not pay anyone anything, save all that anxiety and time and risk of a jail term. It would also deprive all those freeloaders and cops and officials of their ill gotten gains. They would have a broken BMW which could not be fixed in Myanmar, and no one would be game to buy or even ride it. It would attract too much attention to them. Plus I could buy another BMW for less than all that back in Australia or in Europe. if I decided to go on. So after another fine meal of imported Australian beef with hosts and the obligatory beers, the decision was made.

We figured I had to get out of the country before my tour guide came to pick me up on Sunday morning. We thought about going that night, but it would have been a rush. My friend settled into the computer and found a few flights to get me home. The first leg would get me from Yangon to Bangkok and would leave on Sunday morning at 7:30am and hour before the boys would turn up in the van. I couldn’t take all my gear as I was still suffering from the shoulder injury which prohibited my lifting more that a kilo, and a foot that was still swollen and bruised and really didn’t like stairs. My friends said I could leave what I couldn’t carry and they would somehow arrange to have it forwarded to me. Luckily I also had my passport back.

I was really concerned that the boys would land in trouble and I had no way of avoiding that. It really made me feel very bad. My hosts assured me the tour guide would be OK and that he would understand. When I was rung that night to be reminded about the time of pick up,  I had to ask to bring the rest of my gear, that had been left in the van, helmut, boots, jacket etc, over to the apartment so I could keep it all safe in the one place, no use taking all that with us to Mandalay.

It turned into a late night with ongoing discussion on the ramifications of my impending departure. I still had reservations but I couldn’t stay and had to go. It wasn’t the easiest thing to get up after 20 minutes sleep and prepare to catch a taxi to the airport at 6:00am. I did do it though and made it just in time. My passage through the immigration check was pretty freaky and I was hoping that the officer didn’t notice how very nervous I was. I seemed to take forever to get to the front of the queue. Easy as, no problems and I ended up racing to catch the deadline on boarding the plane.

I wasn’t until the plane left the ground that I felt I could relax. It was a pretty long flight with stops in Bangkok and Kuala Lumpur. When I arrived in Brisbane I really had a hard time trying not to break down. My brother picked me up a the airport. I was home safe, but I was still pretty unsure of so many things. I had a couple of days at my brothers, such a great feeling to be back in the safety and comfort, and in familiar territory.

I flew down to Port Macquarie where Beck had turned up with my van. There she was, standing next to the van with little Corby, as the plane taxied to the terminal, arms waving wildly. Beck was the last person to give my a hug when I left and the first when I arrived home. It was great.

I was really strange to get back into the van and drive on four wheels again, I was very cautious like I’d just received my driving licence. An hour later I was really home, back at the farm I had left, with so much anticipation 7 months earlier.

I’d do it all again.

2 thoughts on “Escape from Myanmar”