Just a little about the bike saga. It would appear that the reason for all the problems lay in the fact that people you pay to do a job should know what they are doing.

If it had not been for the people who fitted the new rear tyre putting the spacers on opposite side to what they should have been which put too much pressure on the wheel bearing, it would not have collapsed. Had it not been for the boys at the BMW dealers, who did the service on my bike 2 weeks before I left, who when I pointed out to them that the brake disc was occasionally hitting the brake pads not been so dismissive of my concerns and brushed  it off as a slightly warped disc, I probably would not have lost 7 days of my trip languishing in the pub in Cloncurry. 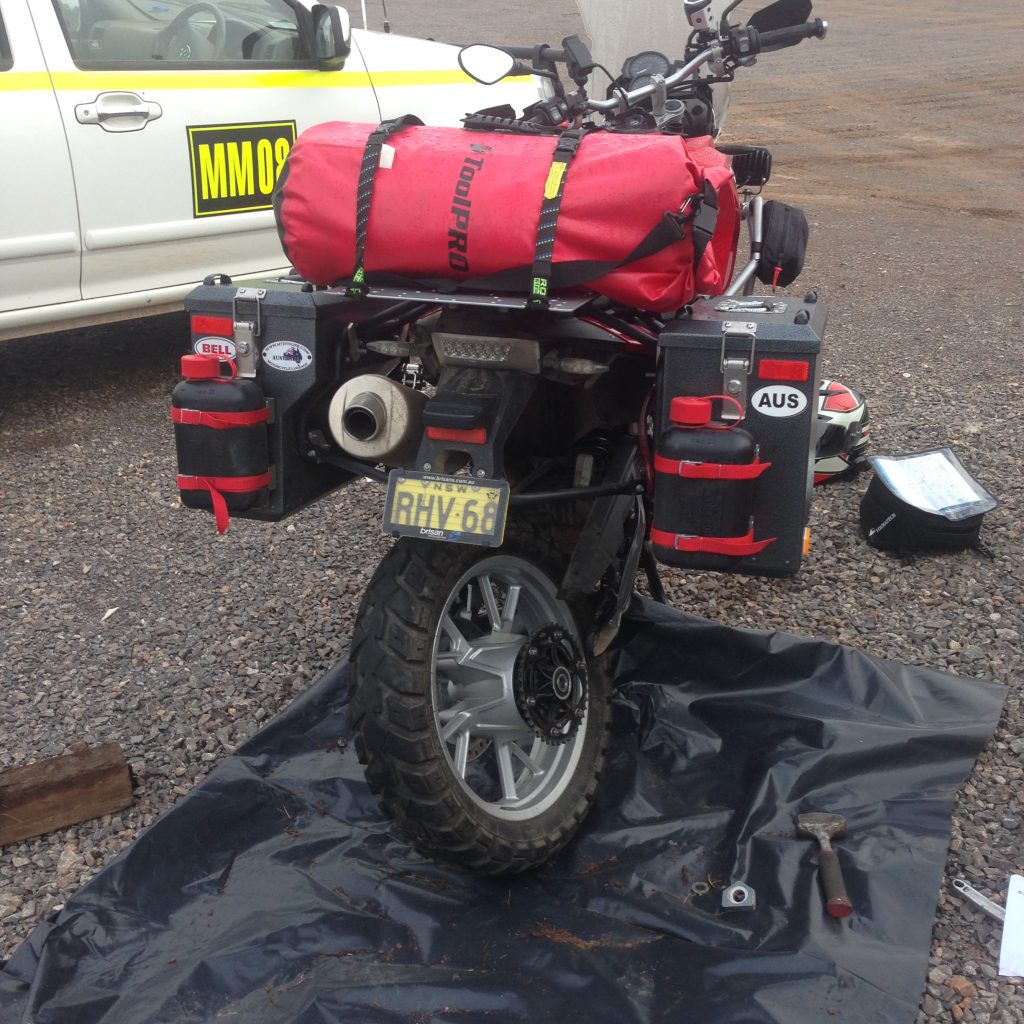 However, I did. The upside was that I missed out riding in all the cold and wet which came with an unseasonal cold front . And the wonderful NRMA paid the expenses.

Had a bit of fun reinstalling the back wheel. I now this is really slack of me, and I should have in my pretrip preparation, but I have never taken the wheel wheel off this bike before. When I got the wheel back from Townsville the sprocket and mounting were tapped to the hub. My friend Robert and I wrongly assuming that the way it and the accompanying rubbers were in the right position we just had to push it all together and she’d be right. Wrong. The bike shop had fitted the sprocket assembly to the hub but hadn’t secured it in any way, It’s a really tight push fit. In it’s 750km journey to Cloncurry, it has all come apart so the courier guys had just wrongly put it all back where they thought it should go and wrapped tape around it all. We just assumed this had been done by the bike shop. Wrong.

We struggled for an hour and a half to get the sprocket to fit into the hub, and we came very close but no. Untill a chap from a local tyre service offered some assistance. Now he didn’t know what he was doing either “never let us touch bike wheels“, However, in a spark of genius or just good luck he changed the way the rubbers sat into the sprocket housing and “hey presto”  it fitted beautifully.

This was not the end of it. When fitting the wheel back to the bike there was a lot of grunting and levering to get the spacers and the wheel to fit between the swing arm. (We had noted the position of the spacers when we originally took the wheel off).Eventually we did, but it didn’t seem right and it was very hard to turn the wheel cause it was binding on the brake housing. At this time Robert has to go and rescue a break down at Julia creek. this meant I had to solve the problem. I rang the bike shop and queried the position of the spacers, which one which side,as they were different. You guessed it  they were in the wrong sides. So again I remove the wheel, reversed the  spacers, put it all back together without the grunting and levering. Perfect, no rubbing together of anything, wheel rotating smoothly. I am so pleased. I can confidently now say I now know how to remove and replace my rear wheel.

This whole process which should have taken half and hour, had taken around 5 hours. I was mobile again. So it wasn’t BMW’s fault at all. Probably comes down to me for not knowing more about my bike. 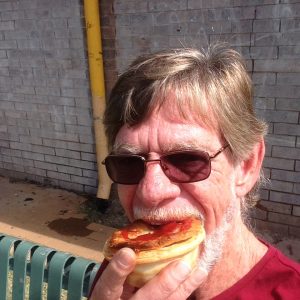 The next couple of days were a bit of a blur. After getting everything,and me, sitting comfortably on the bike, set out for Darwin around 2pm.

The slag is the highest hills

I didn’t get to look at Mt Isa which I intended, just skirted to town stopped for petrol and coffee. Took a pic of the slag heaps and a long long truck.  Just up the  road a way (100kms). I saw this strange sight of a woman pushing a cart. As luck would have it, a rest stop followed shortly after, so I decided to stop a have a closer deco as she went by. She  didn’t go by. She too pulled into the rest stop and came over to my shade.

Now sometimes you can start to thinking you are doing it tough on your travels. Like a sore bum or stinging shoulders, nothing compares to what this beautiful lady does everyday. She clocks 25kms a day. It had taken her 4 days to cover the distance i had done in less than an hour.

She is walking around Australia to raise money for the Black Dog Institute. I spent a very enjoyable hour with Tracey and  you can too. Read her amazing story (and hopefully donate to her cause) here: http://onewomanwandering.com/blog/ 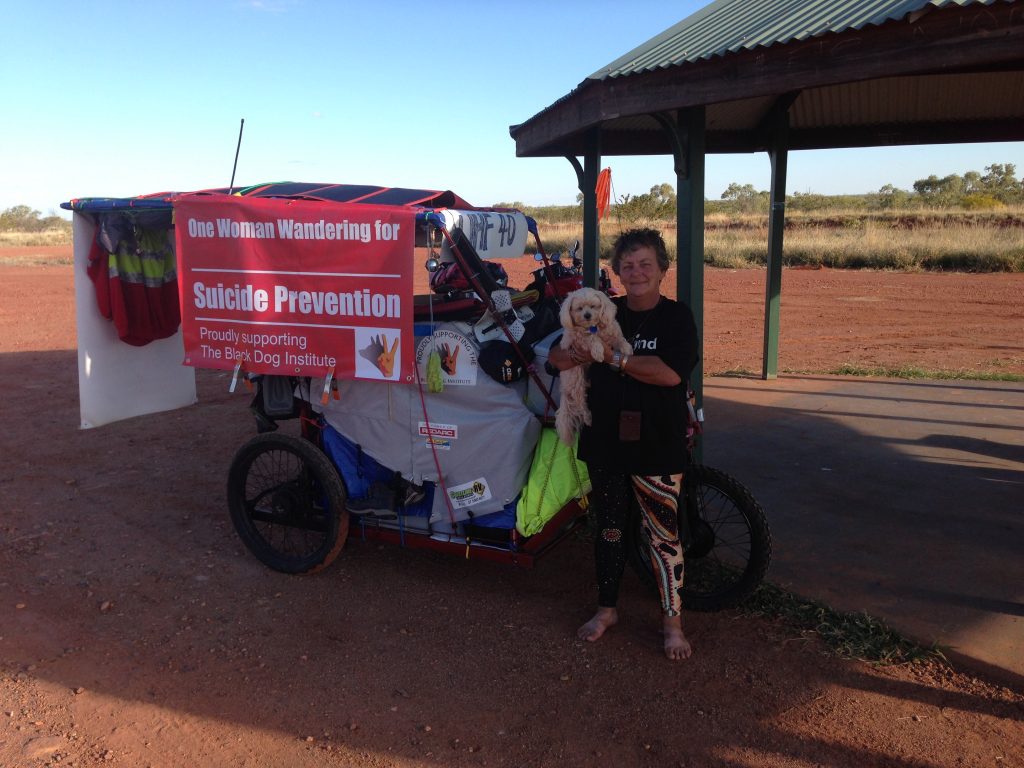 Tracey and her dog and her push cart

That night I managed to get to Camooweal, the last town before crossing into Northern Territory. I  had a good pub meal of rissoles, a chat to a few grey nomads and then off to sleepy byes.

At the crack of dawn, down, or is it up, the road we go. After crossing the border the roads improved heaps as did the landscape, more rises and curves and pretty red rock covered hills, even trees. This was good. Passed through “three ways” where the Barkley joins the Stuart Highways and powered on to a goodly little road house and caravan park at Dunmarra. 10 hours and 780kms. Enough for that day. Only 700 to go. Now I could have gone quicker, however, I have found that once I get past 120km/hr the fuel consumption almost doubles.

On my last day to Darwin I managed to develop the skill of riding no hands. With the cruise control set, I figured I must have covered 300kms, in this mode, all up on the way to a longish stop at Katherine. (Does wonders for your gluteus maximus).  Longish because after 2 days I finally had mobile reception and messages from my brother Robert complaining he didn’t know where I was. So with all those concerned satisfied we continue onwards and upwards. It is getting decidedly warmer.

HEY HEY.   Its 4pm Friday and after 1700 kms in 2 and a bit days, I am in Darwin and thinking I have enough time to get the bike booked in….Again no… Someone had neglected to inform me, a NSWelshman, that this Friday was Darwin’s show day and a public holiday and the whole city was closed. This was probably a good thing cause the things I had to do before the bike could be left were rather time consuming.

3 thoughts on “Cloncurry to Darwin”