Upon awaken fairly early to another beautiful day, I was keen to get on my way resolved to the thought off long stretches of straight flat roads, and I was not disappointed.

I was thinking I would stop and look around Longreach, however, as I passed by the Qantas historical thingy and then the stockman’s hall of fame, I guess I felt I hadn’t been riding long enough to justify stopping, so I cruised about a bit and passed on through.

After another 170 something kms I arrived in Winton and again just kept going. It was too early to stop. I don’t know why, whether it was that I had had the cruise control on for a long to or the fuel can wasn’t fully closed, but I went through a tank of petrol in twice the normal rate. Once I turned off the cruise control and slowed down a bit it returned to normal and has been OK since. 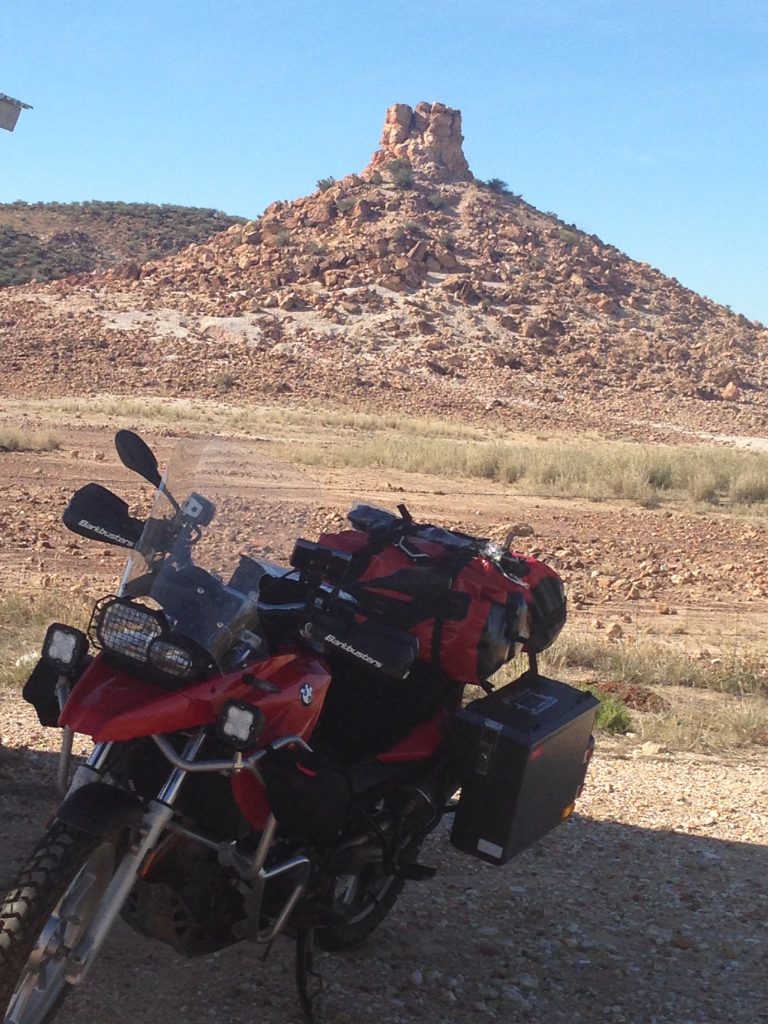 First hill for some time

Now the country had been a little green up till then apparently due to some recent rain. The ravens and eagles were having a wonderful time feeding on the road kill on Kangaroos. You just don’t ride at night in outback Australia. I did, I remember pass over a few hilly bits and remembered how to negotiate a few bends in the road. By now I had reached the “Channel country” so the road became a bit up and downish with all the causeways. There were some interesting red rock formations and I was taken it steady talking to the birds, myself and any fellow travellers who were going the other way. I don’t think they heard me. 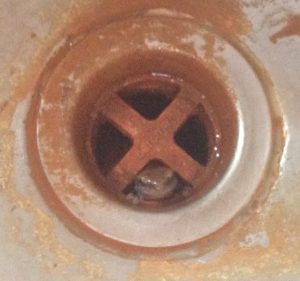 That night I made it to the small, one pub, one road house, town of Kynuna and availed myself of a 5 minus 4.5 star converted worker quarters room complete with a water stained stink, dripping tap and a cute frog starring up at me. However it was a comfortable bed with several beers and some pleasant chat.

Next morning I did the usual top up tank thing at the road house and followed in the wake of the six Harley riders who had stayed the night prompting me to sing “Born To Be Wild”to myself as I set off. Often wished the beema had a resonating burble to it’s exhaust. I guess it’s just not a german thing,… being loud that is. Having passed a couple of them and  then sitting on the the side the road at a rest area, I could hear them a approaching, I reckon, from a good kilometre away going like the clappers.

I was having fun. I reached Cloncurry and having had myself a nice breaky, wished the town a lovely day and set off for Mt Isa. The landscape had turned decidedly brown.

Little did I know at the time that I hadn’t seen the last of Cloncurry. 50 kms up the road I had just overtaken a road train at a rather rapid rate, the bike, Cherry Red, was not behaving or sounding well.

I came to a grinding halt on the side  of the road, back wheel seized against the disc pads. I knew this wasn’t going to be one of those fun days. 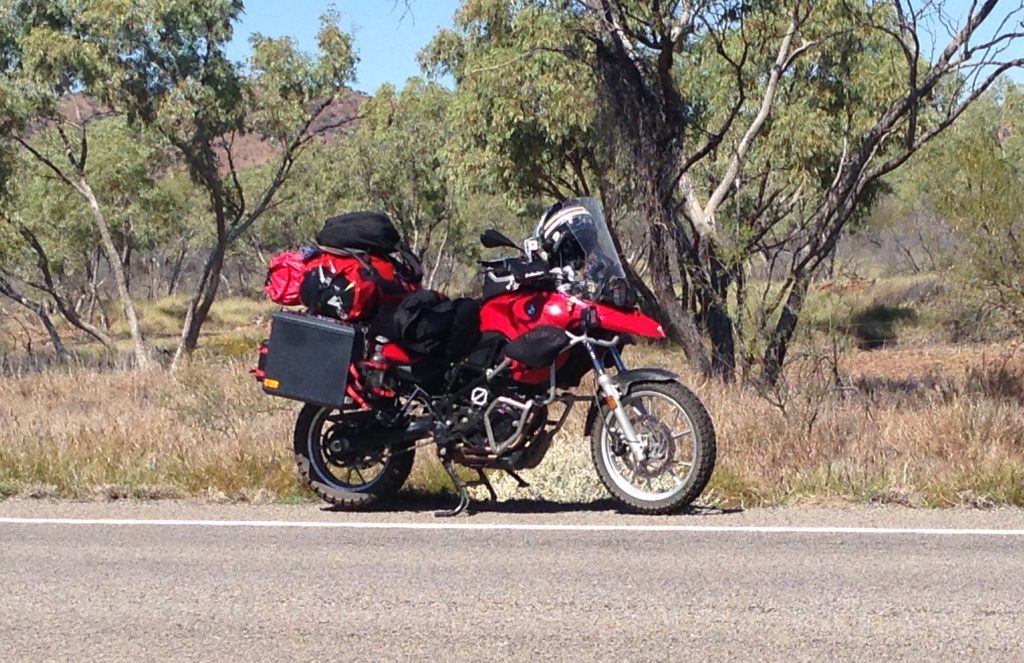 I got down and checked out the back wheel and managed to ease the pads away from the disc so as to get the bike up on the centre stand. I was still none the wiser as to the cause nor the magnitude of the problem. I had, in one of my more lucid moments, opted to include my bike on my NRMA membership.

So with that in mind I thought to call the NRMA. This would have been a good idea except my mobile provider was with Optus, hence no reception.

Luckily a good samaritan stopped and he had a Telstra provider. Managed to get through and would arrive in 45 minutes, which would be about 1:45pm.

Luckily I had some water and the shade of a tree to wait under till the man arrived. Several other good people slowed enough to ask after my well being.

Right on time, Robert, the man I would become eternally grateful to, arrived in his big F100 and tilt trailer to ferry my bike back to Cloncurry. 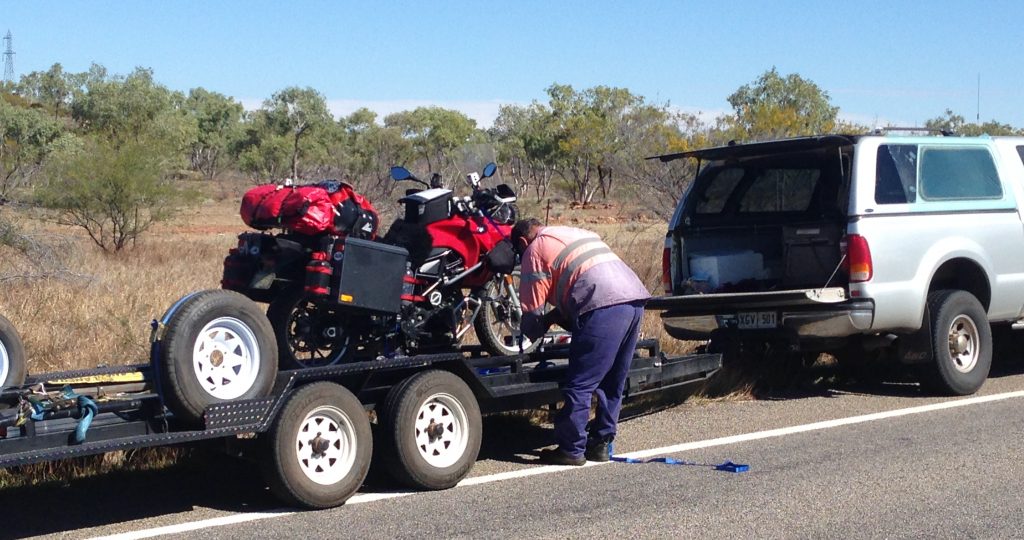 Now at this time I was presuming I had buckled the rear wheel (F650Gs twin is fitted with cast aluminium wheels) so after we had off loaded the bike at the yard. I started on my marathon list of phone calls. firstly to the NRMA to check on my roadside assistance plan. Apparently when adding my bike to my existing premium care car package the lady had not included my bike in premium care and I hadn’t picked up on it. After one and a quarter hours of negotiation and some very sympathetic folks at NRMA I paid the extra for premium care. This was way beyond normal policy. So now I have my accommodation paid for plus other bits like car hire. 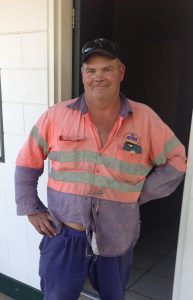 Robert ferried me around the town running into this pub or that motel to check on accommodation . Finally I got into The Post Office Hotel Motel and in a good room.  Because there  is no car hire in Cloncurry Robert washed down a mud encrusted ute from the depot and I now have that to drive around.

The next series of calls was to BMW dealers to see if I could get a new wheel. Computer says no new wheels in Australia. One from Germany would take 4 weeks and cost $1500. Not an option. Phoned all the wreckers I could locate, once again the computer said no.  Found a firm in Brisbane who could straighten the wheel for $200. So that was the plan.

Back to the depot where once again Robert helped me remove the back wheel. In the process of removing the axle the left rear axle bearing came out in a disintegrated state. A light  went on for both of us (I am not mechanically minded). Maybe the rim was not buckled after all. That started a new around of calls to see if I could get the parts. Luckily after an agonising hour or two thinking about my options if there were to be no parts in Australia, and the thought that BMW won’t fit  after market parts, the call came back that they had managed to find the parts in Australia and  could get them shipped up. I, again with Robert’s help, got the wheel to the couriers to be sent off to Townsville. So now I just have to wait.

The upside to all this is firstly it happened in Australia. I had Robert’s wonderful assistance. Also an unseasonal cold front and rain had hit a large part of Eastern Australia, Cloncurry included. Temperatures had dropped to a 12 degreesC max and I was in a nice warm dry room instead of fighting the conditions on a bike. By the time I am finally back on the road it would be warm and sunny and I should still make Darwin in time. So things could be worse. Could be on a bus back home and  Queensland might have won the 3rd state of origin game. 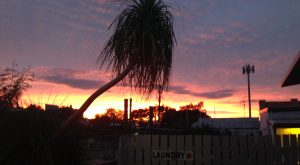 My phone provider as just texted me to let me know I have used half my month call allowance already. Wonder why.

5 thoughts on “Barcaldine to Cloncurry”