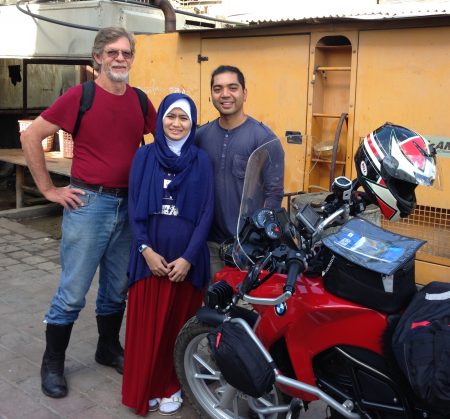 My generous hosts at the Audin

Said goodbye to my hosts at the Audian Hotel, and headed for the border with West Timor. Now for the most part the road was reasonable but in other bits it was absolute crap. They don’t seem to like sorting the boulders from the gravel, using graders or rollers. It’s like they just dump it from the truck and let the traffic flatten it out. Very unnerving. This is not helped by the holes in the middle of the road with bits of branches sticking up to warn you. But you sort of get used to the unexpected.

I was concentrating so much on the road that I missed turning off to Balibo, so I was at the border without any forewarning. They are not very big on road signs. The border out of East Timor was fine, first the police check, carnet, immigration, there was always several people directing you where to go, not a lot of work for them to do,  On to the west Timor border 500m down the road. This is still the old one, however a new one 20 times bigger is under construction. ushered to customs for the carnet, had to inform the 4 or 5 officers how to fill in in, diverted via the currency exchange to immigration where they did a fairly good check. They opened one of the three dry bags by not the panniers, they were friendly. Had to the have the customary photos taken of the bike, them and the bike and them and me and the bike. Then I was free to go. Probably took about 1 hour.

You definitely knew that that you had ridden into a different country. More people and traffic, but the main difference was the road. Not wide, but with a good surface, a scarcity of pot holes and little construction work. The terrain is rather hilly so it was mostly a ride of ascents and descents and lots and lots of tight curves. All overtaking of trucks and slower vehicles had to be undertaken with a leap of faith. My faith, I discovered, was not as great as most of the other riders on the road. I just could not believe the risks they would take. I was having a ball and cherry red was loving it. Don’t think I got past 4th gear before I lobed into the town of Kefamenanu. I’d had a fairly gruelling day as I hadn’t been on the big bike for something like 16 days. Despite being promised WIFI, at the motel I was in, it was not going to happen. So no blogging or research. The hours you can waste trying to get wifi to work.

Couldn’t wait to tackle the next leg, down to Kupang, the stepping off point to Flores. Just as enjoyable as the previous day. the gearbox got a real workout. So much concentration on the road conditions, hardly game to look around.

It was only about a 5 hour ride, which was just as well. I was knackered by the time I reached Lupang. A rather congested town, lots of traffic and people and hot and windy the day I arrived. I eventually came to a stop where I could sit and have a cup of coffee and try and figure where to stay. Finally opted for a 4 star hotel going at a stand by price. Very comfortable. My biggest dilemma  was that I couldn’t find a cold beer anywhere. The drawback of being in a Moslem country. I could find beer in the supermarket but not cold. In East Timor I could buy cold beers anywhere. In my searching I ended eating at a small eatery. Ordered one thing and got something else. But no beer. Resigned to an alcohol free night I returned to the hotel to enjoy the luxury.

I had spent a lot of time on the internet trying to find current information on the ferries to Ende, Flores, without any satisfactory results. Figured the best thing to do, and because I had little else planned, was to find the ferry port to get some answers. The latest thing that I had earlier read, was that the ferry went on Saturdays and Mondays. Now there are quite a few ports along the bay, the one I wanted was at Bolok, half an hour south of Kupang. I eventually found to right one, problem with signage again. Rode into the parking area and was directed up to the ticket office for bikes. Three or four uniformed young lads were there to attend. Finally worked out that the ferry to Ende left that day at 3pm but that I couldn’t buy a ticket till 1pm, three hours away. 15 minutes later one of the boys indicated a car down on the waterfront and intimated “my friends, my friends”. What he meant was that there were some white people in the car also waiting for the ferry.  He promptly jumped on his bike to inform them they they had a “friend” up at the ticket office. before long up came Alice, introduced herself and invited me to join them down by the waterfront. Alice and her partner Gregory, both Artists, had been cruising around Indonesia for two months gathering information and ideas for his current project. Gregory was slicing up fish for lunch. We ended up in discussion for a good few hours in the hot sun, waiting for the ticket office to open. Around 1pm we got the word and purchased our tickets for the ferry. All  good. Proceeded to board the ferry. Because we were early there was only about 10 small bikes, what looked like a houseful of furniture and us. 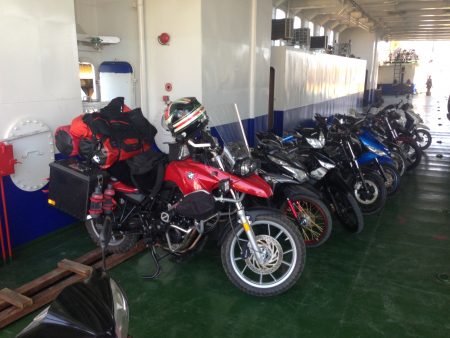 All settled in and along comes a fellow from the ferry crew and proceeded to inform Gregory in Indonesian, sign language and what not, that be would not be able to disembark the car at the other end because there way no landing ramp at Ende  and that everything had to be carried off the ferry. All not good. Gregory then thought he should ask about my bike, twice the size of the others. No that wasn’t on either. Off the ferry, get a refund on the tickets and find out our options. We now had to come back on Sunday to catch the ferry to Lanantuka, a ferry port at the eastern end of Flores.  By now Gregory and myself, and probably Alice, were hot, extremely annoyed and bloody thirsty, which of course meant that we had to find a cold beer.  So back into town to find a shady spot close to a source of cold beer. This we subsequently did and boy did it ever go down rather well.

Gregory and Alice decided they would drive back up to Soe in the mountains, where it was cooler, to spent Saturday. I was invited to join them, however, after a full bottle of beer, on an empty stomach, didn’t think it was prudent to ride too far. In fact the few kilometers to the cheap hotel I had earlier checked out, turned out to be rather harrowing. Luckily I didn’t come to grief. I made a note not to do that again.