There wasn’t too much around Kupang I wanted to see. Gregory and Alice had gone off to the cool of the mountains in Soe. My aim was to find a nice cool quiet and unpeopled place by the sea. I had not been too happy with my choice of hotel the previous night and had to wait till check in time to decide on another. My idea proved not as feasible as I had imagined. However, after an hour of riding back and forth,  came across a steep road down to what must have once been a port for big boats but the boats had become ships and this was now a wharf complex for fishing boats. How they can be confident of taking these things to sea and returning safely is beyond me.  I had a shady tree to park the bike and one lone boy fishing, wonderful. I had bought some mandos and was peeling the first, when a car with mamma, poppa and the two little baby bears decide to join me. Now there was a couple of acres of carpark, complete with deserted shady pavilions, miles of water frontage and jetties to explore. Where do they park? One bloody meter from my bike. I had found this site, It was mine. I was not having kind feelings toward these people. So for three quarters of a hour I almost felt like I couldn’t go near my bike and my much sort after piece of shade had been taken from me. During this time several boys on bikes had turned up and parked a short space away. So when the family decided they had annoyed me enough and others had come to take on the role, they left. By this time I had half dozen riders checking the bike. This soon grew to about twenty including the food seller and a guy selling fish, all trying to find shade under my tree. My failure to acknowledge their existence or answer any of their foreign questions, like do I look Indonesian?, had some effect, they all eventually peeled away to go and find something even more boring to do. I was left with the lone fisherman and my shady tree by the water. 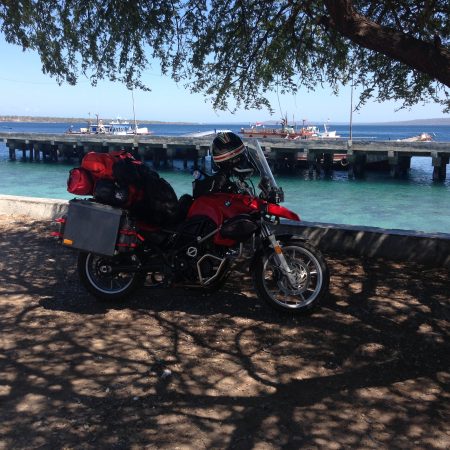 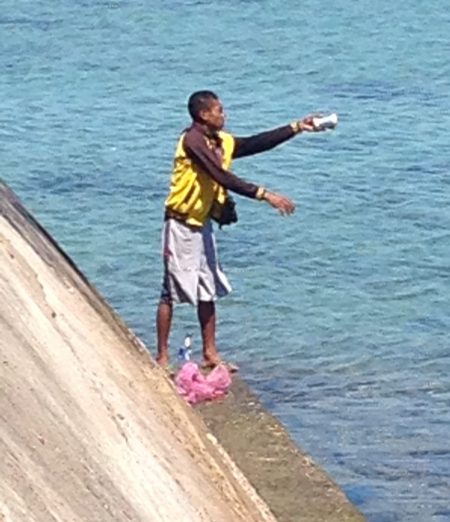 I won’t go into the fiasco of the booking into my hotel for that night as will only revive the anger and frustration of dealing with inept hotel staff and the incompetence of booking companies. Suffice to say I had a booking for 1 night which had somehow turned into a 5 hour stay and I would have to leave at midnight. For an extra $8 I got to stay till morning…..ahhhhhh. It was a nice hotel though.

I had to leave early because the manager at the previous nights hotel told me I had to buy my ticket by 8am. Wrong. I arrived at the terminal and was shuffled into a line of bikes waiting to buy tickets. After I while I spied Gregory’s car parked where they had spent the night. I didn’t wish to disturb them as it appeared they hadn’t surfaced as yet. I bought a ticket and went back to the bike. Shortly thereafter I spied Gregory and although reluctant to leave the bike and all my gear, when over to  reconnect. Gregory quizzically asked why I was in that particular queue of bikes when they were all lined up to go to the island of Rote. I again asked for a refund on my ticket and we sat around again till ticket sales to the Larentuka ferry went on sale at 10am. Sat around for another 3 hours to board that ferry. I was starting to get a complex about me and ferries.

The 12 hour ferry ride was not an experience I enjoyed which is putting mildly. The noise, The vibration, the smell of deisel, the people lying and sitting and taking up every conceivable space in order to undertake this journey into the night as comfortable as possible. I, unfortunately was not afforded this “pleasure”. I had secured a place on a row of polystyrene boxes. However, Gregory had decided I should repeatedly try some 70% proof alcohol mixed with soft drink which had left me in a inebriated  state. This was heightened by the rolling of the ferry, and necessitating a visit to the restroom. Some large slob in my short absence had availed myself of my spot so I spent the rest of the journey trying to find another. I didn’t. So by 2 or 3 in the morning, come disembarkation, there was little alternative than to unpack the mattress and lie down next to the bike in the carpark and try and grab a few hours. This may have worked if it were not for those who didn’t work, decide in their cars, or trucks or bikes, that they should investigate this rare and obviously noteworthy event. Hopefully this is an experience I won’t have to repeat. So at sparrow’s fart and the increased interest in our presence, it was off the the market as Alice and Gregory needed to stock up on supplies, and I needed breakfast and we both needed fuel and the use of a bathroom. Petrol stations are a good resource for the latter pair. 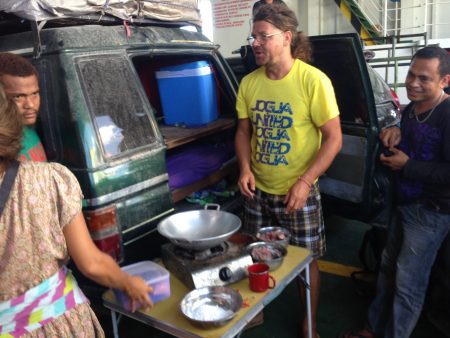 Gregory performing his cooking art on the ferry 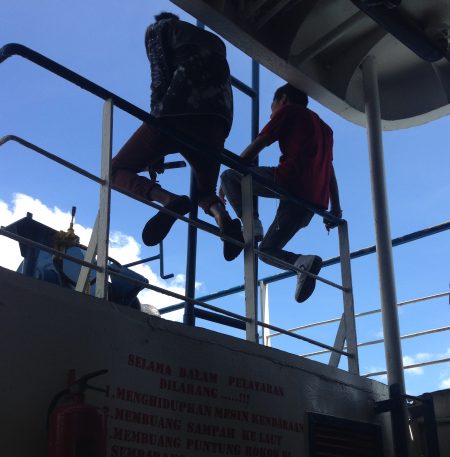 2 thoughts on “Kupang to Lanentuka, Flores to Ende”