I was really happy that I had arrived in Lombok around 1pm as it gave me plenty of time to negotiate the roughly 2 hour journey to meet up with Gregory and Alice in Koeta in the south of Lombok. Unbeknown to me the first town I encountered had decided to hold their independence day parade of school children just as I drove into town. Now with a two narrow lane road with traffic still trying to move, things became just a bit, (well a bloody lot really) and  groups of children walking along, accompanied by teachers and parents, taking up half the road and interspersed with normal traffic, everything came to a virtual standstill. Initially I though this all to be rather cute. The smallest children headed up the parade, all made up in various uniforms, from traditional dress to army to just about every uniform you can think of. Tired of sitting in the traffic with the cooling fan on the motor going full bore,( it was after all 31 degrees C), I pulled out of the chaos to allow it all to go past without my participation.  Whilst being befriended by a young fellow from an adjoining photocopy shop, hoping to improve his English skills, we watched the very slow moving parade from the shade of his shop. 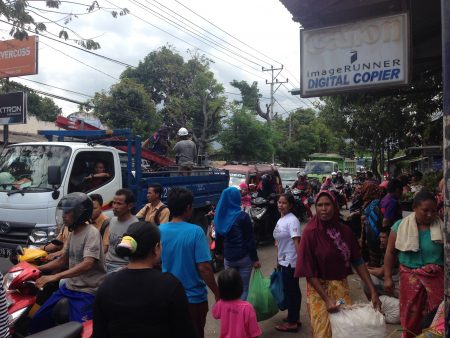 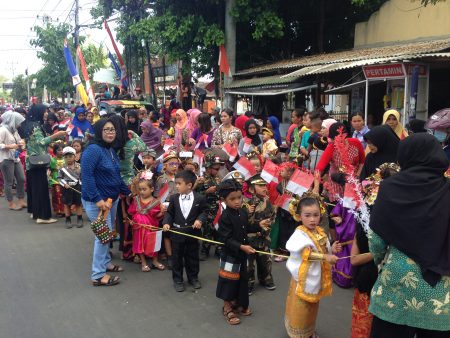 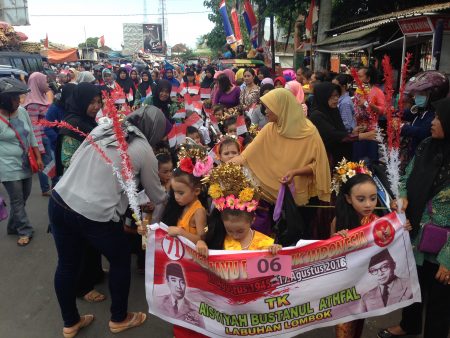 One hour went by and then two. I was starting to get a bit anxious, as by that time we were still only seeing the middle class students doing their thing. I decided to bite the bullet and rejoin the very slow moving exhaust choking traffic. It took another hour to finally extricate myself from this never ending parade. Alice had sent me the google maps link as to where to find them. Google maps defined the shortest route to follow which I did. With Google maps, unfortunately, it does not mean the shortest can sometimes mean that it is the quickest, which in this instance was the case. I did, however, finally make it to the designated location, but no Polish couple in sight. While I was motoring back and forth along the road, and just about given up on the search, who should hail me down, going in the opposite direction, but Alice and Gregory, on their way back from a day at the beach. Before too long we arrived at the place they were staying. Alice had previously tried to book me into a guest house, they had used on an early occasion, only to learn it was fully booked for that night. So I was invited to stay with them. The house where they were staying belonged to some friends and was unfinished. It had a roof and a floor and access to water, but that was about it. They were, as usual, sleeping in their station wagon and there was enough dry floor inside the house for me to set up camp. After one of Gregory’s culinary delights, much discussion and plenty of Bintang and some more newly acquired clear mind numbing liquid I fell into my sleeping bag  for a restful sleep, until the normal wake up call was received.

Started the day with a trip to the local market. Alice was intent on photographing a few more colourful local market sellers, while Gregory was keen to buy more food. I found a new comb. We retired to the house where Gregory treated us all to a feed of home cooked spicy squid. Soon enough we headed to one of the less frequented beaches for a leisurely swim in the aqua blue sea. 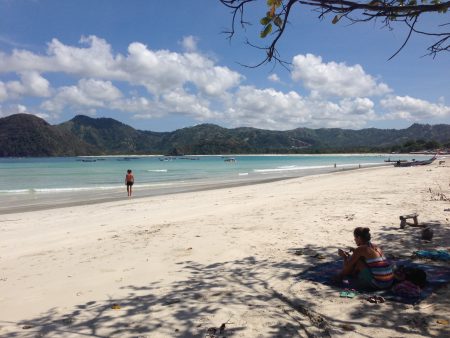 After a swim and plenty of sun, the guys drove me to the Triputi guest house to check that the room they had booked for me was still available. (Perhaps we did that before going to the the beach) That evening I was shouted another delicious feed. I think this was garlic prawns. So as night fell I packed the bike and headed for the Guest house. With a day full of sun, swim, food and beer, I was soon pushing out ZZZzzzs.

After finishing my included breakfast, I was picked up in the green wagon and we returned to the same beach. Gregory wanted to show off his, state of the art, drone. I have to get on of these. 5 km range, video and still camera with gyro. Magic hi-res. What a tool. Whilst Gregory says he is still a novice, from some of the videos they have taken, it looked to me like he had a pretty good handle on it. We went on to another beach, a bit smaller and a lot more inaccessible. Being smaller and with bigger waves it had attracted more of the foreign surfers. We checked it out, but it was a tad too hot and precious little shade, so we didn’t stay too long. Unfortunately on the way back, with very narrow road some dickhead, coming from the opposite direction decided he deserved a bit more road, and BANG the drivers side rearview mirror exploded with the impact, showering Alice with a hail of broken mirror. Few mirror cuts, but it could have been a lot worse.  After returning to the guest house I managed to down a bottle of my now favoured beverage before walking to the next door cafe for a vegetarian meal with some Mexician name. It was really nice. End to another enjoyable day in fine company.

Today, for me was down to trying to do some research of the future trip, catching up with some of the story, emails, facebook, and all that stuff. Gregory and Alice had headed off to main city on the island, Matram, to see if they could source another side mirror. This pretty much consumed their day. On their return I had wanted to shout them a meal in return for all the freebies they had given me. They had already eaten, so it was just going to have to be more Bintang. Luckily Alice doesn’t  drink and drive. By the time Gregory had had three and I had consumed two large bottles, and a Indonesian version of a lebo roll, we figured that was enough, or rather Alice did. I was graciously, and gratefully driven home to sleep it off before a 7:am start in the morning in order to get to Bali at a reasonable time for us to make to Ubud and for me to find some accommodation.