Always seem to find accommodation close to a mosque. So I was awake pretty early, packed and ready to go looking for a cup of coffee. Sumbawa is a totally different landscape to Flores. On the main the roads follow flat valleys. At last I had found some flat straight roads. this is not necessarily good. With the flat land comes grazing animals like buffalo and goats which roam the roads. So even though I had been warned by Syarif of this, I still had the urge to give cherry red a bit of exercise. Got to Bima in pretty good time. Not too many sightings of animals. It was sometime during the middle of the day that I encountered a herd of buffalo, which had just about finished crossing the road, so I wasn’t too concerned, until a pair of young ones decided to have a tussle which completely blocked my path. Thank goodness for ABS braking. I came to a abrupt stop which took me off the road, narrowly missing the rotten beasts. They’re rather large when you get up close and personal with them. I’m not sure whether I scared them more than they scared me. Luckily we all came off unscathed. I rode a little slowly after that. The day proceeded uneventfully after that. I never did find that coffee. 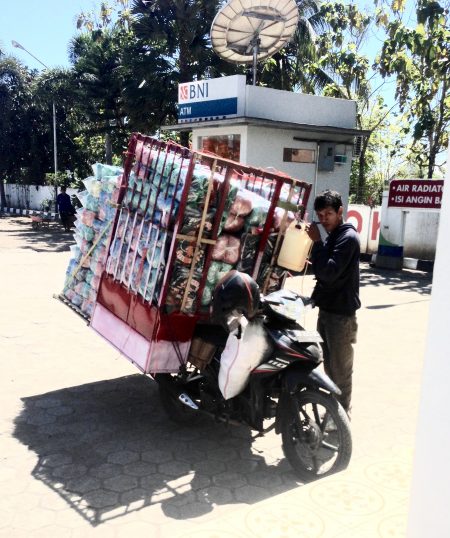 At one stage, with no interesting sightseeing to do, I thought I might get  through the island in one day, however, with the early start and still a bit weary from Flores. I called it a day when I got to Sumbawa Besa. This place had no redeeming features. I had along the way checked agoda for hotel reservations and come up with Hotel Dewi. So I locked the location into google maps in order to follow directions to said hotel. Now this would be normally have been a good idea except that both google maps and apple maps showed the location in two different places, neither of them correct and three kms apart. So having gone to the first and then to the second and then back to the first. I gave up and tried to call forgetting that I had no phone time on my sim. So all I got on the other end of the line was a lady telling me, in Indonesian, words to that effect. I was getting a bit annoyed, mainly because I had already paid for my room and I wasn’t going to find the missing hotel. Well, whilst I was swearing at the sky, a couple of rather suspect guys seeing my distress, or wondering why I was sitting on the side of the narrow road blocking traffic, decided I could use some help. I informed them where I wanted to go and instead of just directing me, they escorted me the 1 or so Kms to the hotel and then disappeared without my being able to thank them profusely. I tried to explain the stuff up to the head scarfed girl behind the counter. But “no English”. Thankfully it was a huge old fashioned hotel with monstrous rooms with aircon. I was very relieved. However, the hunt for a Bintang proved fruitless. Sumbawa is probably the most moslem oriented island in Indonesia. Having given up on Bintang I went for some food. A small shop caught my eye selling pizza. I figured that would be a change. Having entered the small eatery I spied in the frig a bottle of Bintang. Ah bliss …pizza and Bintang. All is right with the world. I also found that just about all media is highly censored in this town.

I was awoken early to the sounds of several “singing” mosque identities duelling as to who had the loudest and most onerous tones to their calls. They all won in my opinion. I needed to get away from this town. Headed for the port of Pototano to catch the Ferry to Lombok. These ferries go every hour. It was only about a one and a half hours ride over nice flat roads. Managed to find the port, brought my ticket, boarded the ferry and within ten minutes the ferry headed out. Only took about two hours from go to whoa. Easy. Sumbawa so inspired me I didn’t take any photos except the boy on the overloaded honda.