Having blasted through Java and Sumatra and with Medan within easy reach, I am now in Bagan Batu, I am having a lay day to catch up on a few things and get this old body a bit of a break.

I left Surabaya and headed to Batu. I had to obtain a police accident report to a assist in a travel insurance claim and also to show the police my bike was repaired so that they could release Mr Mohummad’s vehicle. I also so wanted to see if if it was still being impounded. On arriving in Batu I couldn’t find the cop shop and finally giving up asked a few guys at a recreation park. One of them kindly escorted me to the cop shop in the town, which wasn’t he one I was after. It took about half a hour of questioning  and phone calls and the help of an interpreter  before I was escorted to the Police compound. Here I asked to see the car that hit me and was shown a similar vehicle that had had a front end collision. However, the photo I had taken on the day of the accident didn’t match the vehicle I was shown. Funny about that. More on this later. I could not get a copy of the Police accident report. What I got, all in Indonesian, was that I was involved in a collision on the 2nd September in Batu, my details and that was about it. No details of the accident, how it occurred, the other party involved. Of course no information as to when the vehicle was released. What a total waste of time that was. So half an hour later, on the road to Blitar, I passed the spot of the accident and didn’t even bother to stop. I was now in new territory 7 weeks late. 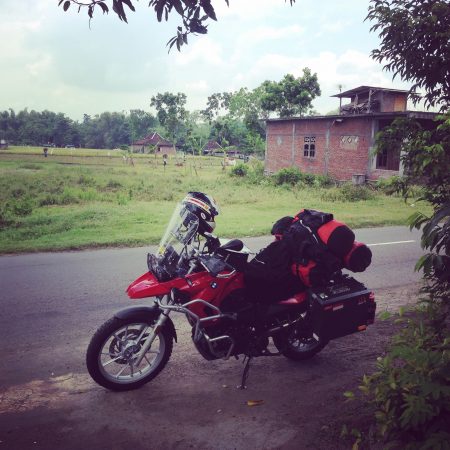 That night I stayed in Blitar. For following days it was a matter of trying to put in as many miles as I could in order to make it to Medan and leave Indonesia before the visa ran out. Next day I was on the road to Yogyakarta. Originally I was looking forward to spending quite a few days here. I had spent time here previously visiting Borobudor and elsewhere and wanted to ride up a few volcanoes and explore the Deang Plateau some more. I didn’t. I arrived after dark booked into a hotel. Got up in the morning and got back on the bike. I had encountering some rain on previous days but this day, on my way toward Pekalogan, I encountered a massive storm. It got so heavy I couldn’t see five feet in front of me, well that may be a exaggeration. I sought refuge in a petrol station along with around 20  other motorcyclists to wait it out. 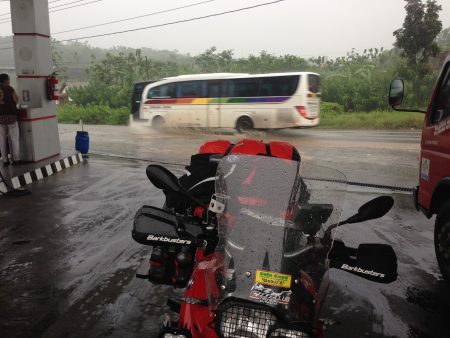 Once it had eased off a bit and all the others had left I ventured forth and that night I made it to Cirebon. I had decided the fastest route to Jakarta was to head to the north of Java. Unfortunately this is a really boring road, but is was faster and flatter. Just keep going. I wanted to call into BMW in Jakarta to get a service on the bike and have the repair work  checked out properly in order tp give me a bit more confidence in the bike’s capacity to continue the trip.

So after a night in Cibebon I was hell bent on getting to Jakarta. Somewhere during that morning I managed to take a wrong turn and wasted a good hour or so going round in a big circle finding myself about 20 kms from where I had started that morning. Joys of riding without a map. My map of Jave had been destoyed in the rain. The map pocket on top of my tank bag I found was not waterproof. ‘For that matter neither were my boots, my backpack, my gloves nor my raingear. As a result of the afternoon rain I gave up about 6pm on reaching Jakarta and called it a day about 50km from my goal.

It rained heavily overnight and was still pouring as I headed out the next morning. I had not been paying any attention to what day of the week it was and that day was a Sunday which meant that BMW dealership would be closed. Cleaver eh? At least I would get to Jakarta and be prepared for Monday. Sunday did not turn out to be an enjoyable day for me. For those who haven’t been to Jakarta you may not know that it has a reputation for the worst traffic ever. In my original trip planning, one place I had really wished to avoid was Jakarta. Years ago whilst visiting my son Danny, in Jakarta I borrowed his car to drive throughout Java, In order to leave Jakarta in one piece I departed Jakarta at 3 in the morning to avoid the traffic. Now here I was, It was raining. the roads in Jakarta are constantly going through upgrades and new overhead roads being built. So most of the roads are rubbish. The google directions cant keep up with all the changes. Now to add to that I had booked a hotel which was called Red Doors @ Radio something or other. The directions map off the booking.com site took me to another hotel called Red Palace hotel. So I entered the address given by booking.com. That took me to a Red Doors “hotel” but not the one I had booked. So by 5pm I gave up and stayed in that one. I was not a happy chappy. So ended another bloody frustrating day. however, I had survived a day riding around in the rain in Jakarta. I considered that quite an achievement. I had sent off a message to Paulus the sales manager at BMW who I had contacted previously. Unfortunately, I had not received a reply. After all I was the weekend, more dumb thinking. As a result and because the dealership had just moved and not yet updated it’s website, the next morning after ploughing my way through more heavy traffic I arrived at the old showroom address rather perplexed by the fact the showroom was empty. However, after a short wait I was greeted by the interior designer in charge of the new showroom. So with him on his new Ducati monster bike and me dragging along behind we headed for the new showroom. Wow was this place ever the real deal. I had never come across a motorbike sales and service facility as beautifully set up as this one and they hadn’t finished yet. 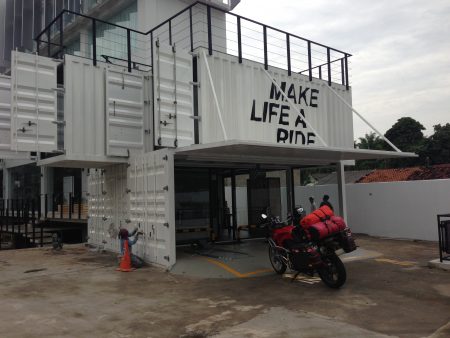 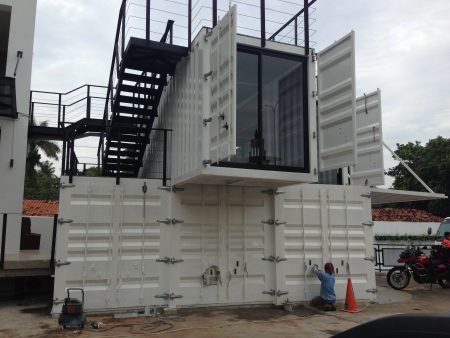 innovative use of containers

I was introduced to Paulus and over coffee and pastries I was made aware of the appalling predicament the BMW dealership faces in Indonesia and why it took so long to get my parts to Surabaya. It seems that in Indonesia they have people called “parallel suppliers” who order parts offshore in order to cut out the official supplier. which off course pretty much makes the exclusive franchise from BMW Germany a bit of a joke. I fail to see why the parent company cannot or will not correct this situation. I am writing to Germany to voice my concern. Especially in regard to how this situation affects the BMW owners and riders.

The bike by this time had been moved down to the service bay, which had the appearance and cleanliness of a hospital. I wanted to watch and provide the team of my concerns. The normal service was done and then came the inspection bit. 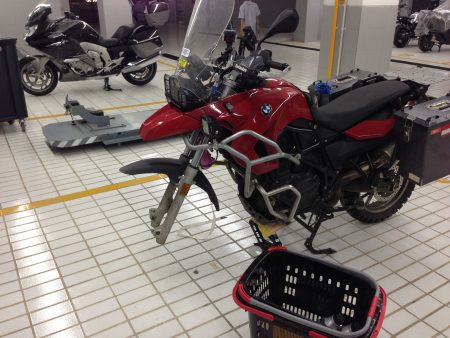 With the right gear we soon found that he front brake disc which was straightened and not renewed, was still warped beyond normal tolerances and a new one would cost $600 and not arrive for 3 weeks. Not doing that again. Also found was that the rear disc pads needed to be replaced as one side was petty much gone. This went back to the new rear tyre and reinstallation of the rear wheel with the spacers reversed back in Taree. I should have noticed this before now. The boys did a great job and spent a lot of time and even washed the bike. I was left much happier and very grateful to those at BMW Jakarta, but even more angry with SSM in Surabaya.  By now it was dark and I had to navigate my way to yet another hotel. The directions to this one were only a couple of streets out but a local knew of the place and all was well.

With the bike attended to, come Tuesday morning, all I had to do was get out of Jakarta. Hoping to miss some of the traffic buildup, I was on my way before 8am. That didn’t work. At one point I was stuck in a 7 minute congested area virtually not moving. An hour later I had managed 10 km and had hit the “open” road on my way to Merek and the 3 hour ferry run to Sumatra. I had survived. Wish I had enjoyed it more.