We headed of the the market. Alice likes markets. Fascinated by the clothing and the colours worn by the market sellers. They also had to acquire a new wok to replace the one that was left behind after driving off the ferry and leaving it under the car. 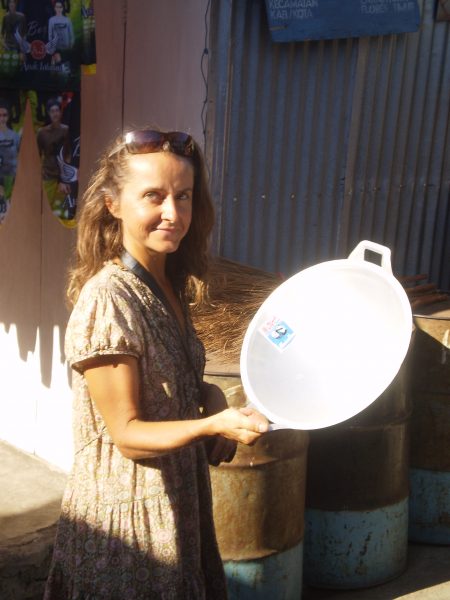 Allce and the new wok

After grabbing some market style breakfast, we said our goodbyes, and agreed to met up on Lombok. With not much sleep the previous night  I was not intending to travel to far that day. Once on the road, however I didn’t feel too bad. The roads of Flores are in good condition, at least most of them. There is no way that the road planners have heard of a straight line. The road is very windy with steep ascends and descents. On and on and on. It is gruelling with very few places to even stop the bike and rest. So I just kept on going dodging oncoming traffic and passing slower vehicles and motorbikes. I was having a ball. I rarely got past 2nd gear with many extremely tight uphill and downhill hairpin bends. Towards the end of the day the altitude increased as I neared Ende. I started to run into cloud, it became cold and then i started to rain. This was the first time I had experienced rain whilst riding since leaving Kempsey in NSW. So I can really complain. I was, however, rather tentative as the road are covered with diesel spilt from overfull tankers going around tight corners and climbing very steep hills. So it was a slow  crawl into Ende but I had made it and still upright and stuffed. I found a descent hotel and a beer and called it a night. 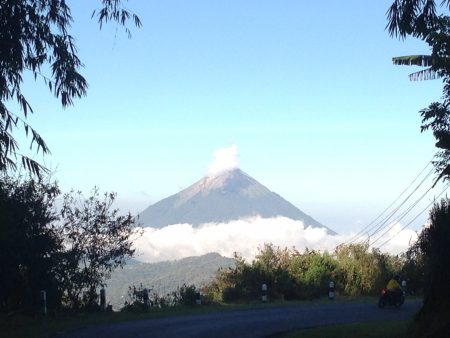 Didn’t get away to a very early start. The first  section wound it way along the foreshore, reasonably flat with the occasional headland of windy bits. Once I reached Nangaroro I started into the hills again. Got back down to averaging about 20-25km/hr and that was with attempting to go at a good speed. Whilst I could out accelerate the small bike on the road I often could not keep up with them. Every corner to me was an unknown. Whilst there are indicators on the approach to most corners to tell which way the road is heading, it does not tell you how sharp the corner is. So the locals would fly around me often overtaking trucks and buses on blind corners, which I was just not prepared to do. So with few overtaking opportunities I was often left behind. I got used to it even if it did injure my pride somewhat. 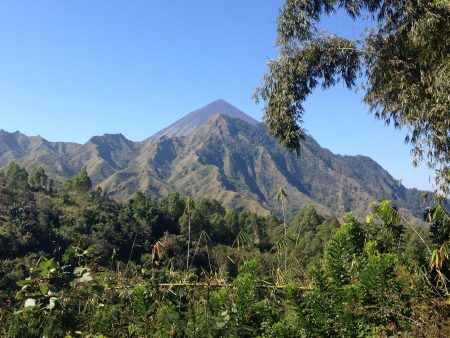 Did I tell you Flores was hilly?

I called it a day when I reached Bajawa. I think my body was trying to tell me something. Being on a bike I can really only stop in the bigger towns as there is no available accommodation in the smaller towns and villages. And even then I need to stop around 5pm just in case it takes a while to find somewhere to stay that I am happy with. The standard of hygiene and cleanliness has quite a way to go in Indonesia. The open drains and piles of rotting garbage can be an affront to the senses, but you adapt. It’s the way it is. Found a decent hotel, some beer and some food, in that order, and retired early. I tend to wake up fairly early in the mornings mainly due to the caterwauling emanating from the many mosques which starts around 5am, I think they call “it a call to pray”, it would have the opposite effect on me. I would be running in the other direction.

My next leg towards Ruteng was extremely slow. Once again the road was good but through very mountains country the whole way. My progress was halted  at one point for an hour as all traffic was stopped while the excavators and truck cleared  the spoil of a rather large landslide which had blocked the road. Arrived in Bajawa around 4:30pm. In my search for a hotel I pulled into a large Catholic school, mainly because of the flat ground and a shade tree, to find a clue on maps for somewhere to stay. I was soon surrounded by children and amongst them a couple of English speaking teenagers. I was soon directed to a nearly hotel, big rooms and surprising clean. I took a 2 floor room and was soon ensconced on the large front balcony enjoying, what I considered a very well earned Bintang 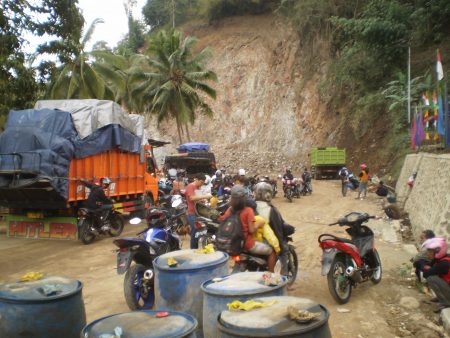 Waiting for road to be cleared

Once again I was driven from my bed with the wake up call from the minuets. Ate my breakfast in silence with a group of package tourists, who were obviously above my station as they did not respond to my good morning greeting. So I took my coffee out on the balcony only to be greeted shortly after, around 7:30am, by the first of my initiations into Indonesia’s week long independence day parades of school children and their practiced marching bands. Fairly well behaved lot in a parade about a kilometre in length. Very colourful and loud. They like drums over here. 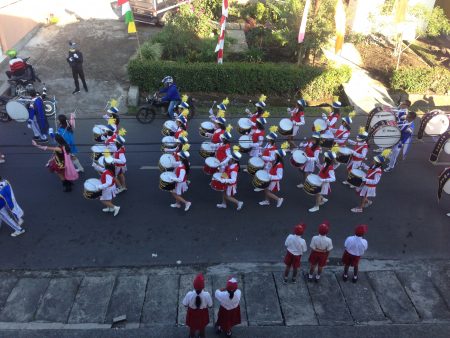 And on towards Ruteng. The road seemed to be more windy than previous days. Either that or I was just longing for some straight flat roads. However, that was not to be. So for my third day is was onwards ever upwards….and downwards ….and sideways through the mountains. On arriving I came across a “good” hotel, well it had a nice entrance facade. The standard room, however, turned out to be very standard. And not a Bintang in sight. There was a lot going on for independence day celebrations in the town square, so in a disguised hunt for a Bintang, I headed in that direction. I was approached by a young lad who asked all the normal questions, where you from, where you going etc, and then proceeded to inform me of the independence day ceremonies and invited himself to accompany me. Well he spoke reasonably good English, so it was OK.  There was a lot of people at the square, with lots of police and soldiers, but nothing really happening. I asked Tarsy Youshi if he could direct me to the supermarket. I had been successful at acquiring a beer in these larger stores before. Unfortunately this request was mistranslated into market. These tend to be rather filthy rows of all manner of foodstuffs spread over low concrete tables usually with the merchant sitting in the middle of his or her wares. But no Bintang. I finally got the message through about the Bintang so off we went to a known restaurant. On the long very much uphill road to the restaurant Tarsy wanted my to meet his family and his 90year old grandmother, who owned the house, where he and many of his friends were staying. So we did.

On to dinner and beer. Trendy little place with over expensive minimum food. Should have picked it. Stay away from trendy looking restaurants. Tansy was good value even if he was prone to not telling the truth. With all the walking and eating and not much drinking it turned into a late night for me. Luckily it was all downhill to the Hotel. 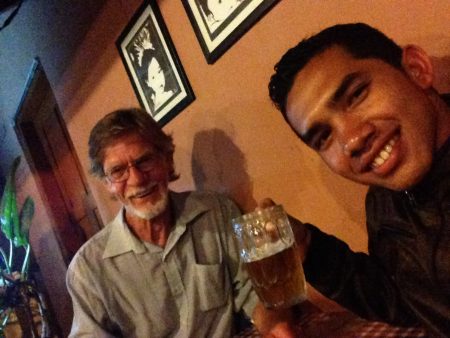 Tansy and I at the trendy restaurant

This morning, eager in my quest to get through this mountainous terrain, I managed to miss a turn, which is not hard in this land of minimum signage, and ended up 25kms along an ever deteriorating road. This is not in itself an indication that you are not on the main road, but after such a distance it should have clicked in a bit sooner. After stopping in a village, checking google maps and with assurances from the locals I retraced my steps to the missed turn off.  I my agitated state I missed seeing the famous spider web rice fields, drove straight past the blue stone beach, (bit of a joke) and maintained the slog to Labuan Bajo, the stepping off port to Sumbawa. My Polish friends were in touch and had caught the ferry that morning at 9am and advised that I should do the same the following morning. This as it happened did not happen. The pace picked up a bit towards the end of this day’s ride and I found myself at the port around 2:30pm. Eventually located the port and the ASDP ferry terminal. Of course at that time of the day all the officers that sell tickets had either gone for a long lunch, to pray, or just have a sleep. So I waited with all the other poor souls who had no where else to be for the ticket office to open. As luck would have it I was once again approached by a young English speaking man. I was able to check with him that I was indeed at the right ticket office. The officers decided 4:30pm was a good time to open the ticket office, and I joined the queue and with the assistance of Syarif I purchased a ticket to Lombok. One problem was that the ticket was not for 9am the next morning. When I asked the ticket seller when the ferry left, his reply was “you go now, you go now”. So we promptly boarded the ferry and within 15min were on our way to Sumbawa. 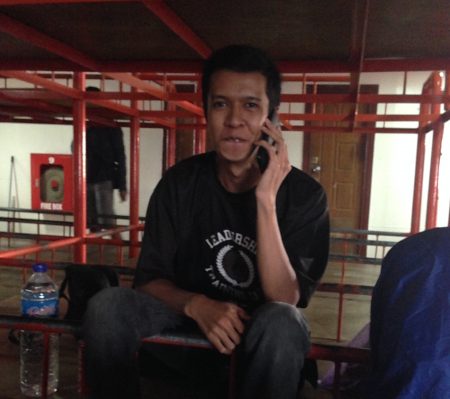 Syarif was on his way back to his home town of Bima on Sumbawa, accompanied by his father. The young man is a bit more ambitious than most Indonesian youth that I have encountered. He is currently studying Tourism at a college in Bali and is into his last year of a four year course. His dreams include working in Melbourne and owning a BMW motorcycle. Currently he is a member of a Bali motor cycle club and is learning 4 languages. Like I said a bit above the average. His generosity extended to affording me a mattress on the very much empty ferry ride. We discussed many things, a lot of which were warnings to do with riding a motorcycle in Java. Really nice guy and I will hopefully meet up with him in Bali for coffee. (His part time job is as a barista). On arriving in Sumbawa at 12midnight he negotiated a room for me at a lodesmen near the port, before he and his father set out to ride the 1 hour or so to their traditional home and I slept. I really appreciated his friendship.

I, despite some of my comments, and the rain bit, really enjoyed my ride through Flores. The concentration on the road ahead was intense, but the joy and exhilaration of all those curves and gear changes was magic. I am hopeful that my gearbox has coped with it all.